DoubleStar is a long-range attack towards stereo cameras (a.k.a., 3D depth camera) that injects fake obstacle depth by projecting pure light from two complementary light sources. We successfully attack two commercial stereo cameras designed for autonomous systems (ZED and Intel RealSense D415). The visualization of fake depth perceived by the stereo cameras illustrates the false stereo matching induced by DoubleStar. We use Ardupilot to simulate the attack and demonstrate its impact on drones. To validate the attack on real autonomous systems, we perform a real-world attack towards a commercial drone (DJI Phantom 4 Pro V2). Our attack can bring a flying drone to a sudden stop or drift it away from its original path, and it can also cause false alarms over a long distance under various lighting conditions. our experimental results show that DoubleStar creates fake depth up to 15 meters in distance at night and up to 8 meters during the daytime. DoubleStar attack may cause severe accidents, even loss of lives, if we blindly trust the obstacle avoidance capability of autonomous systems. 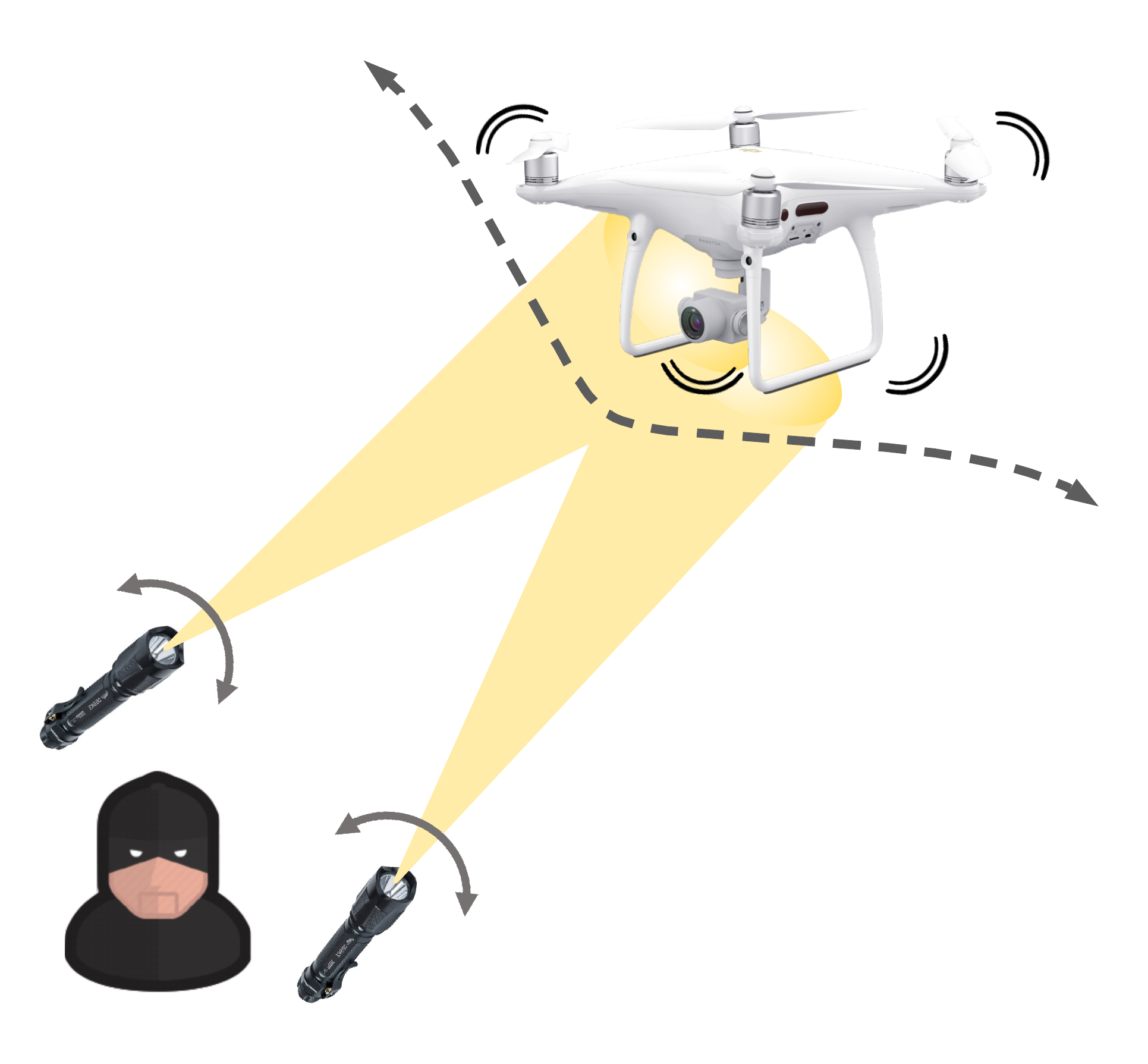 Target Devices in the Experiment

DoubleStar was discovered by the following team of academic researchers:


How do you defend against DoubleStar?

Aiming the Drone in Real-Time Attack

Since the minor change of the lens angle can cause a significant light coverage difference on the victim side, the attacker can easily track the flying drone by continuously controlling the aiming angle of the taped lens. As long as the projection light is injected to the stereo camera, DoubleStar can always succeed.

We simulate DoubleStar drone attacks using Ardupilot and AirSim. Ardupilot is used for simulating MAVProxy as the ground station, and ArduCopter as the drone. AirSim provides the sensor inputs to the ArduCopter. we design a depth manipulator and embed it between ArduCopter and AirSim. By designing different fake obstacle depths in a realistic environment, we successfully demonstrate that our attack can achieve real-time drone control.

An attacker injects the light beams with the same projection intensity using two projectors (i.e., P and Q) into the right and left camera, respectively. It can be observed that one of the injected light sources is brighter than the other one when received by the camera, which becomes a more prominent feature in the image. Such phenomenon causes the depth estimation algorithms to mismatch the two highlighted light sources in the images as the same object due to the weakness in depth perception. As a result, a fake near-distance depth is created in the depth map and visualized in the 3D point cloud.

Two lens flare orbs generated by the strong light sources in the stereo images can mislead the depth perception to falsely identify them as a 3D obstacle.

A near-distance fake depth (around 0.5m) can be generated when the attack distance is 10m in RealSense. It demonstrates that DoubleStar remains effective even without the access to the camera's left and right images.